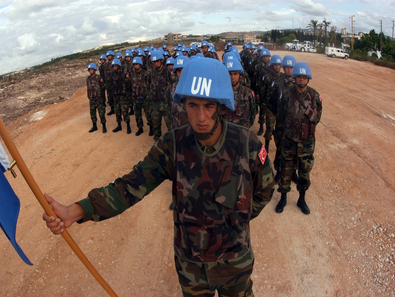 United Nation Peacekeepers who are sent as military assistance to regions in need. Credit: © Shutterstock
The Radical Approach finds that the current performance of the United Nations is far from effective, which is the reason why it should be completely changed. This is a more modern concept but it is quickly gaining a lot of support. They believe that individual changes would not be as effective as changing the system as a whole. American Lawyer and diplomat, John R. Bolt, says that "we have essentially reached the end of the line of decades of effort at marginal or incremental UN reform." This basically says that even after having small changes in the organization, it has not been as effective in covering all the problems or with each solution a new problem arises.
A way to change the entire system of the United Nations is to change from a system that takes one vote to represent one country to a system of voluntary contribution. Changing to voluntary contribution would stop the UN from charging the individual governments for their expenses and activities. The voluntary contribution system would give the governments more control over how much they give to the organization and exactly how that money is spent. This would ensure that the money is being effectively used because it works only in aspects of a country that is clearly needed. There is evidence that shows that the change to a voluntary system would have a positive impact on the "pessimistic phase" that the United Nations is in because of its recent failures in missions.
The opposition to the change to a voluntary system feels that it would threaten the activities of the United Nations. Advocates disagree saying that there are already many organizations that operate on a voluntary funding system and these organizations are fairly stable. The change to the system would be difficult but if it betters a system that is necessary for the global good then it would be worth the difficulties.
Powered by